This research investigates the application of genetic algorithms to the conceptual design of spatial configurations. This approach seeks to integrate the generation of forms and evaluation of performance to design spatial configurations whose morphology is emergent rather than being predetermined.

A Genetic Algorithm (GA) works by evolving sets of candidate solutions that are called populations. A “body plan” is first defined to characterize the relations between the constituent components, i.e. the configuration topology. Each individual in a population is generated through a series of geometrical operations. The body-plan representation, i.e. the configuration geometry, depends on the numerical value of the design variables that are encoded into a compact set of information called the genome. For example, one way to define the body plan is through a series of closed planar curves lying at different elevations, which are employed as the profiles to generate a closed volumetric envelope. The coordinates of the control points that define each closed planar curve are the design variables that are encoded in the genotype in the form of a string of binary numbers. The mapping from genotype to phenotype, which is the set of rules to build each candidate solution is predetermined and non-evolvable. This means that while different geometrical configurations will be investigated through searching the solution space, the configuration topology will remain unchanged. A new generation is produced by recombining through cross-over and mutation the genome of previously generated solutions that are selected based on their fitness. Candidate solutions with a high fitness score have a high probability of being selected to pass their genome to the next generation.

Evolution requires an “environment” that puts pressure on the candidate solutions. The environment can be thought of as a set of design objectives to evaluate a candidate solution and assign a fitness score. A multi-objective optimization process has been formulated for the conceptual design of tall buildings which involves maximization of daylight during the winter season, minimization of exposure to prevailing winds, maximization of the volumetric centroid height as well as of the volume-to-footprint ratio. Daylight and wind analysis have been implemented through a low-resolution approach based on vector projections, which is appropriate for early-stage design and it is important to achieving convergence in a reasonable time since the size of the solution space is very large. Following the cumulative sky-dome approach, a series of vectors representing energy radiated from the sky-dome patches are defined. The angle between these vectors and the normal vectors to the façade panels indicates the degree of exposure to solar radiation which can be employed to evaluate the performance in terms of daylight. A similar approach is adopted to compute the pressure caused by the effect of wind on the building façade. Depending on the value of the angle between prevailing wind directions and the façade panel normals, a certain pressure coefficient is assigned to each panel (Eurocode 1 - Action on Structures - Wind Actions). The lower the value of the overall pressure caused by wind actions, the more aerodynamically efficient is the building geometry. In addition, other measures are implemented to consider feasibility aspects. For example, the volume-to-façade-area ratio is maximized and the façade-to-floor-area ratio is minimized to limit the façade area which is usually one of the most expensive parts of the building. Constraints are enforced on the minimum curvature radius of the façade surface to avoid discontinuities that could be problematic for the supporting structural system. Simplified equilibrium conditions are implemented by checking that the projection of the volumetric centroid falls within the contour of the first profile that defines the building envelope (at the ground level).

The different objective values are appropriately normalized, weighted and combined to form a single fitness score. The optimal combination of weights is estimated through Factorial Fractional Design (Taguchi designs) to maximize the mean of the population fitness for each generation. This technique requires a set of simulations to be run before starting the evolutionary process and thus it bears a certain computational cost. However, it enables quantifying the parameters that contribute most significantly to increase the population fitness as well as those that might affect negatively the direction of evolution. The termination criterion employed in this work is based on fitness stationarity i.e. when there is no significant improvement of the mean population fitness after a certain number of generations. This process produces a set of feasible solutions that, over generations of attempts, have effectively become an expression of the design objectives. Depending on aesthetic criteria and other factors, one or more solutions might be selected for detailed design.

Gennaro Senatore carried out this research for his master’s thesis in Emergent Technologies at The Architectural Association of London. 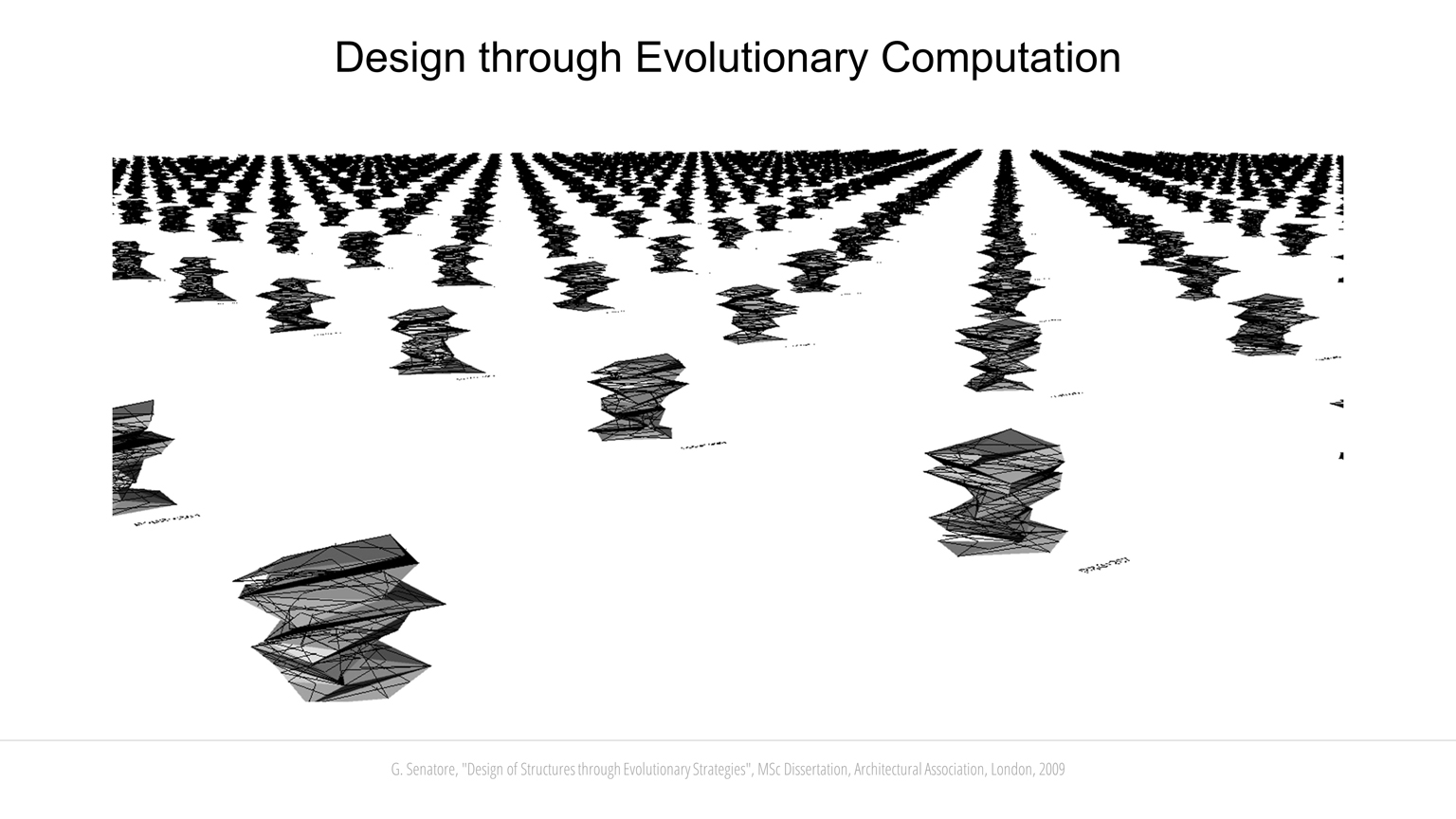 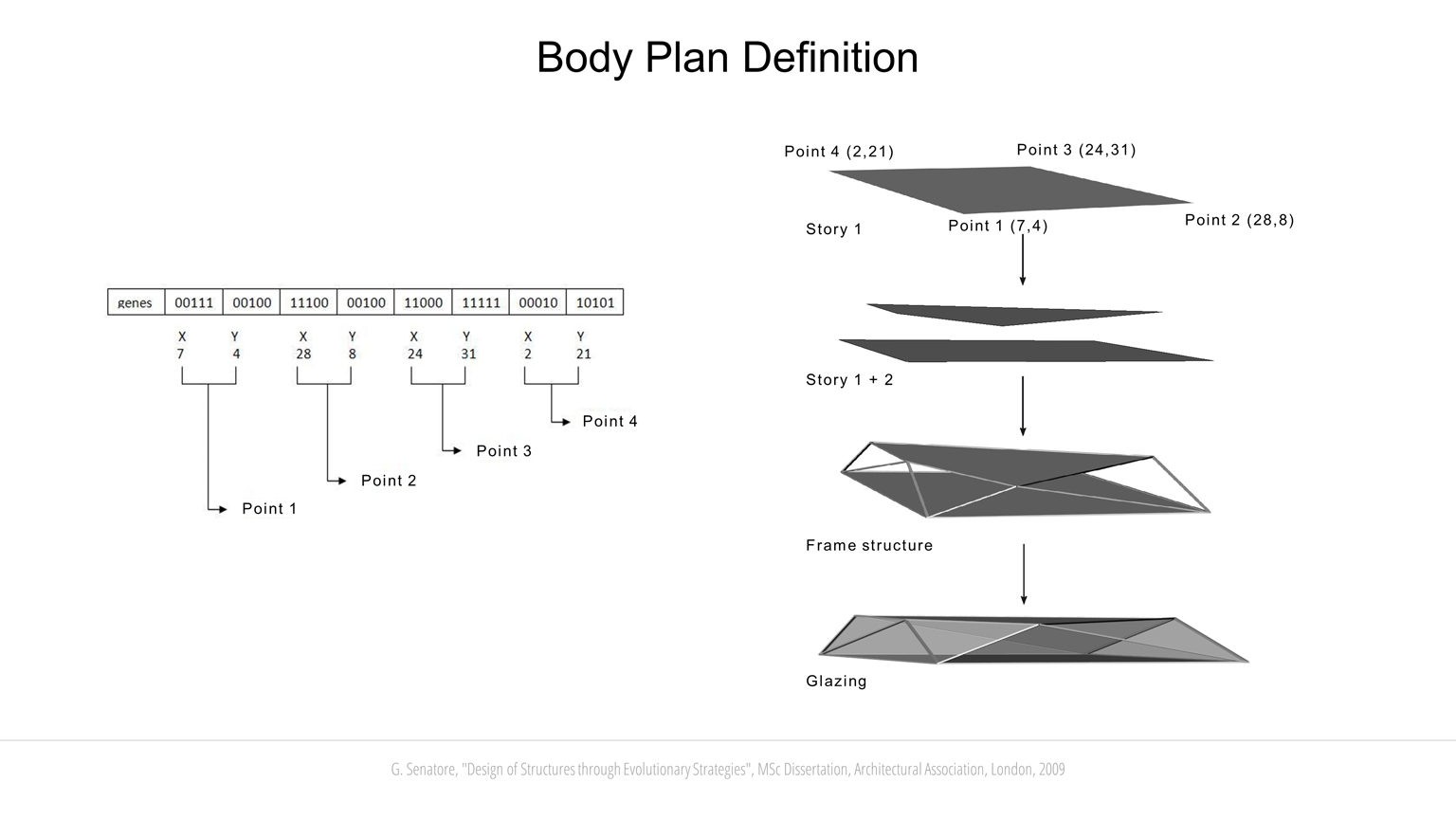 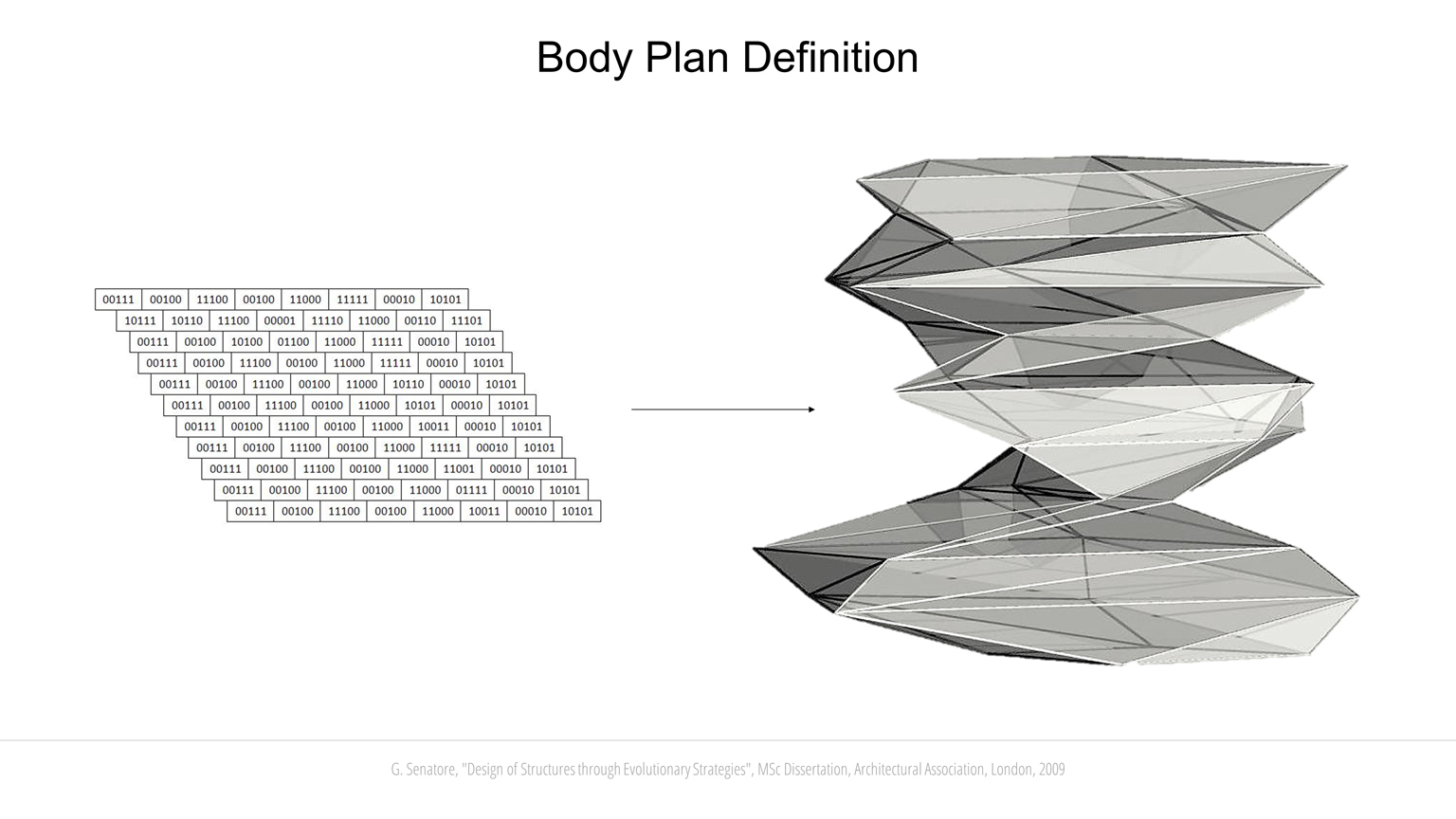 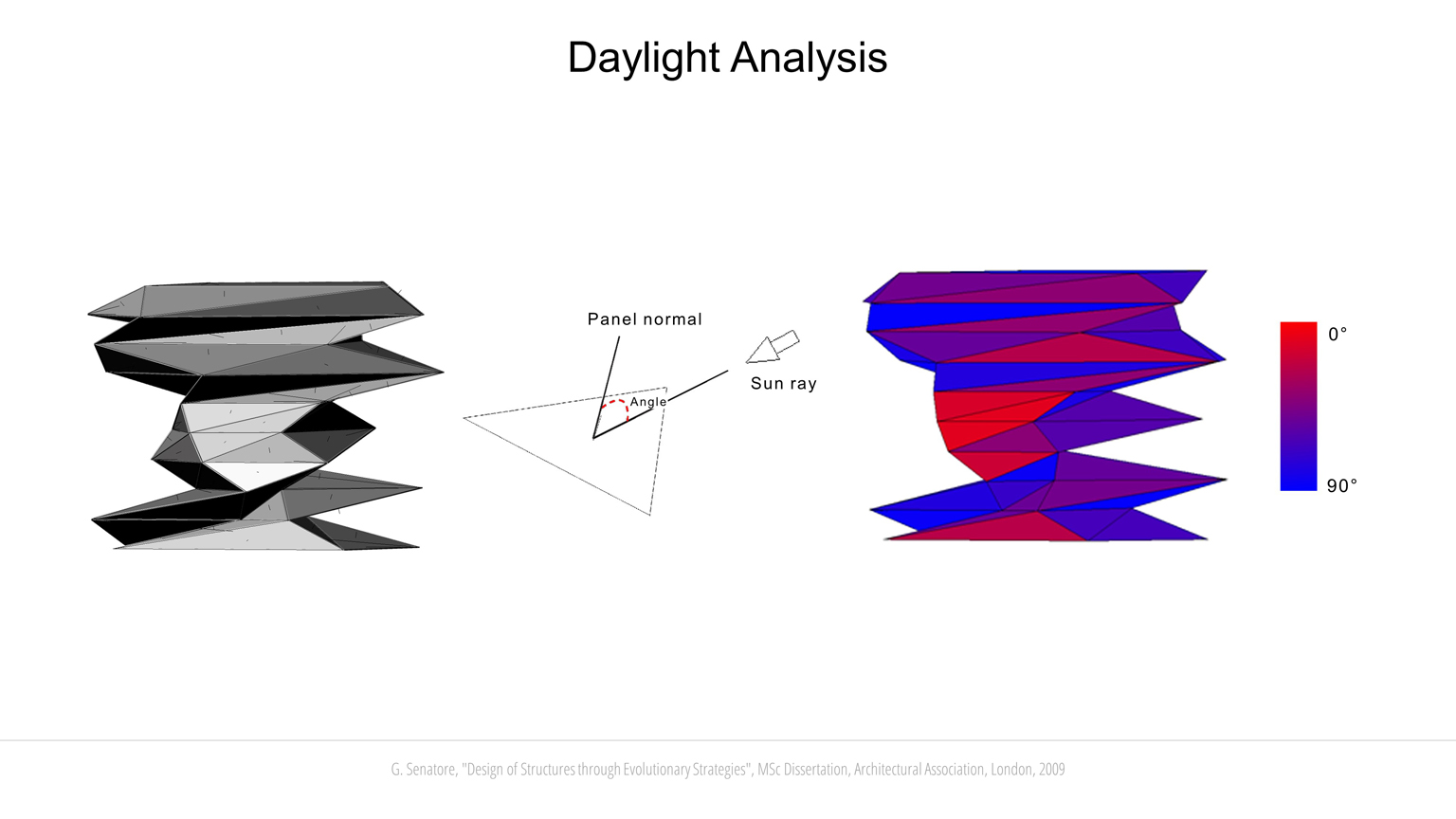 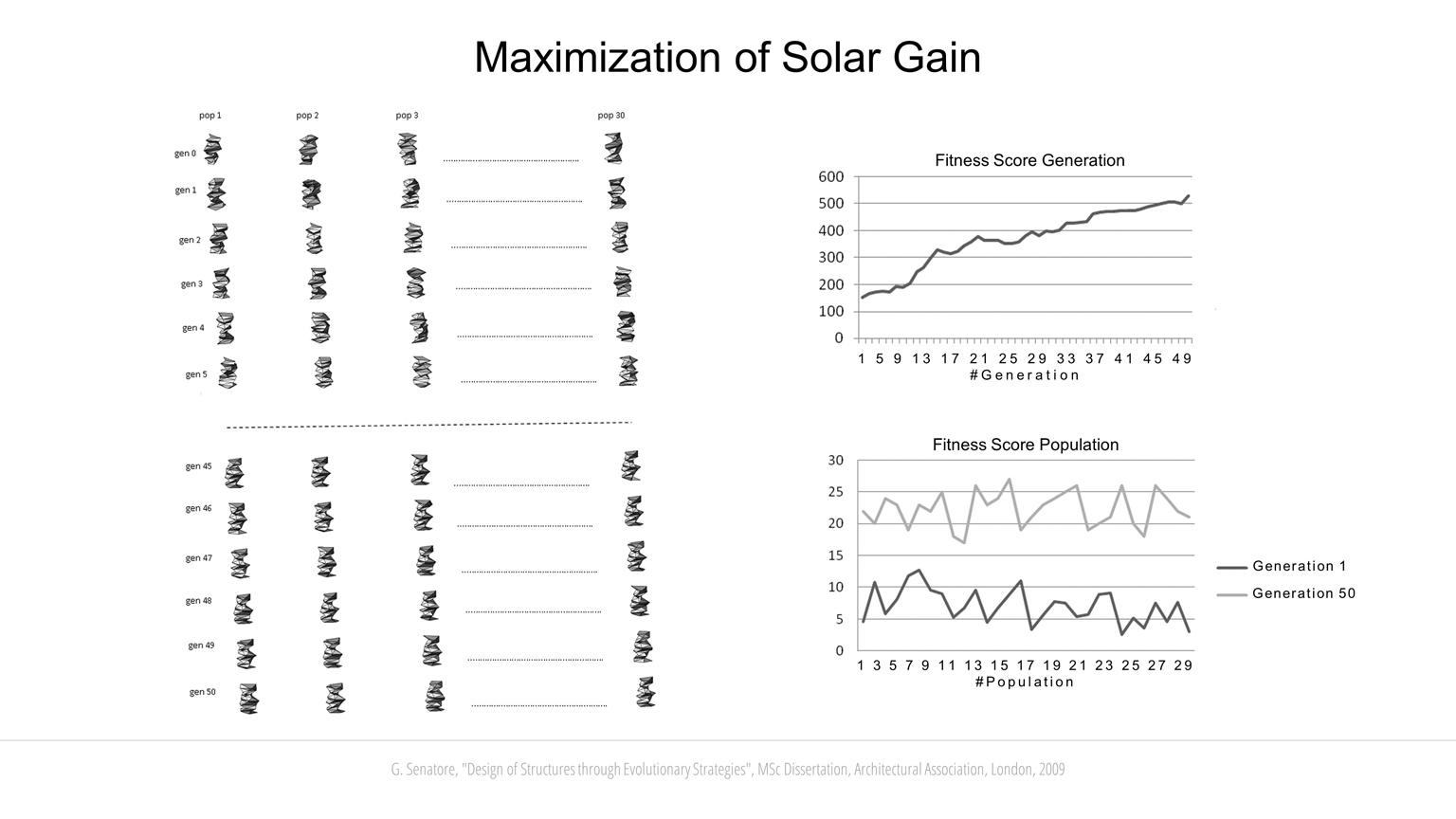 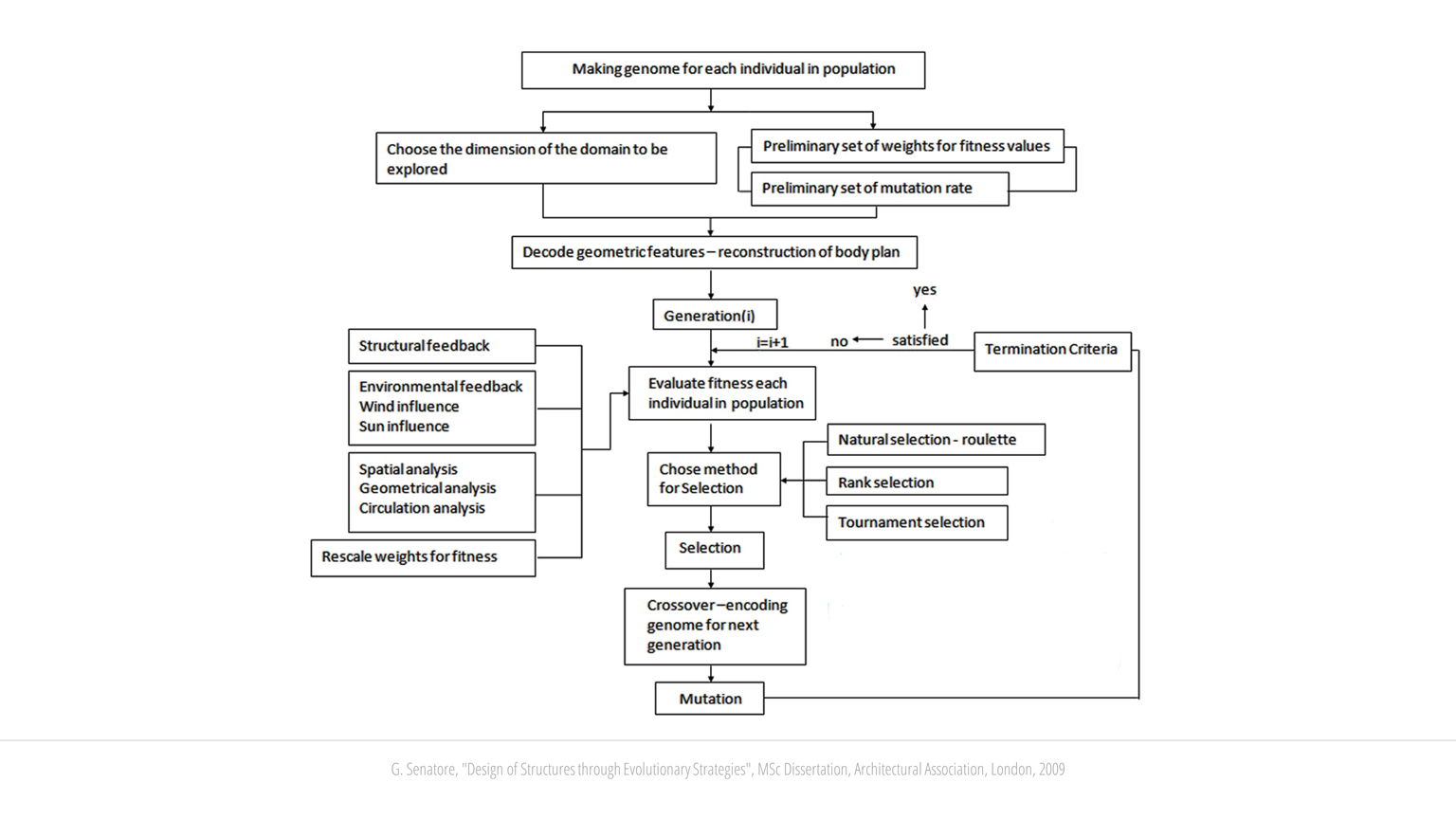 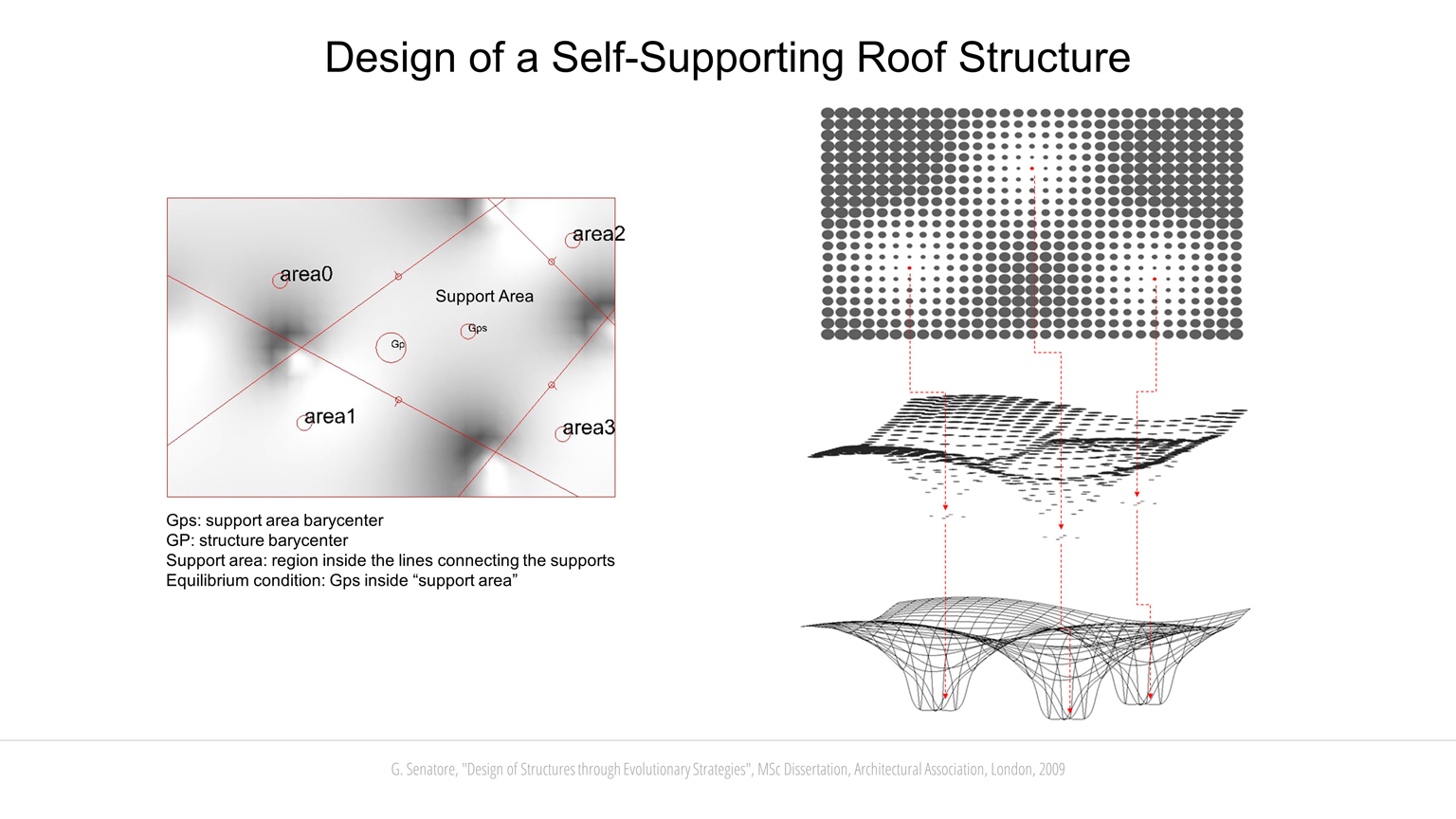 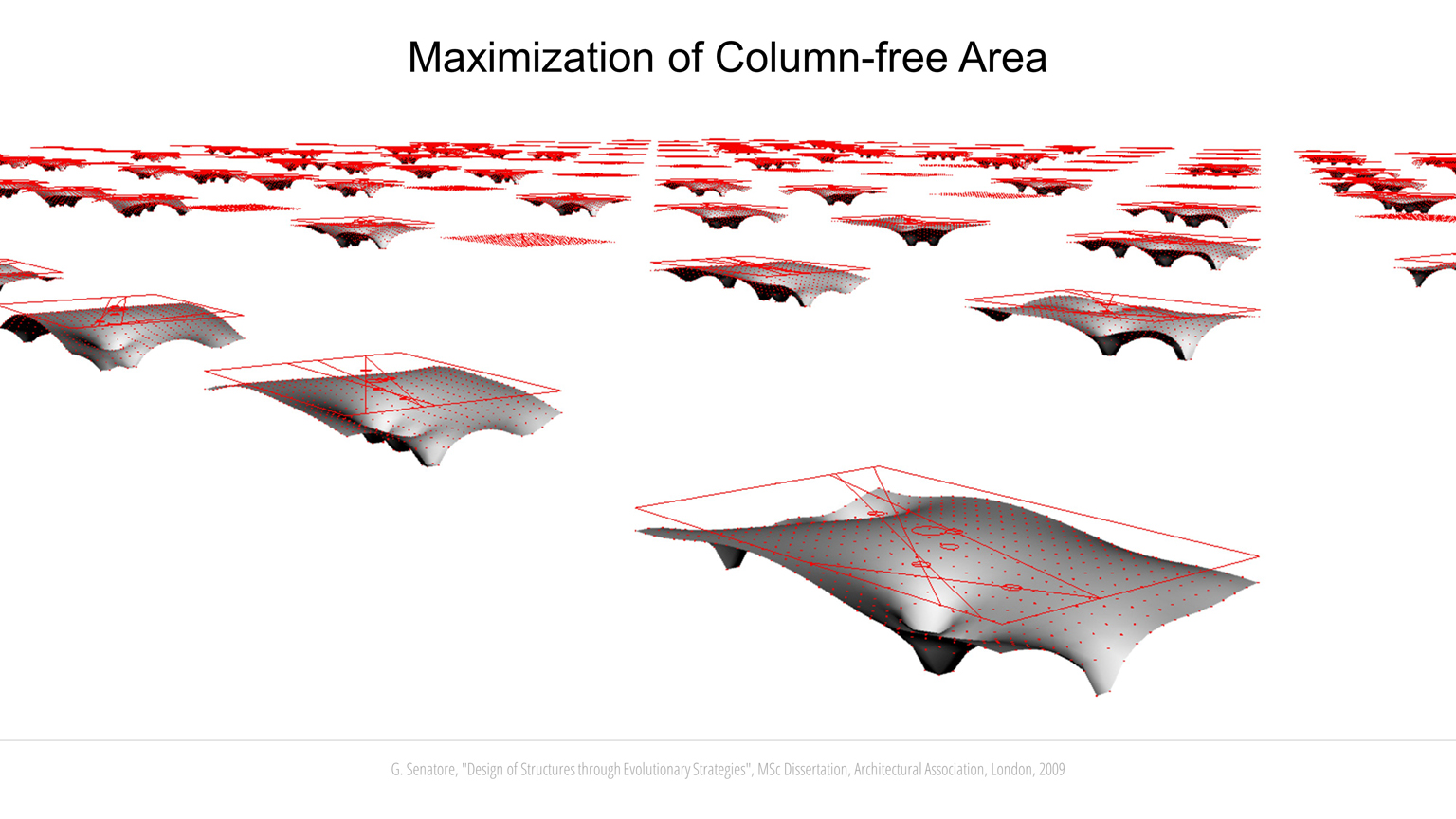 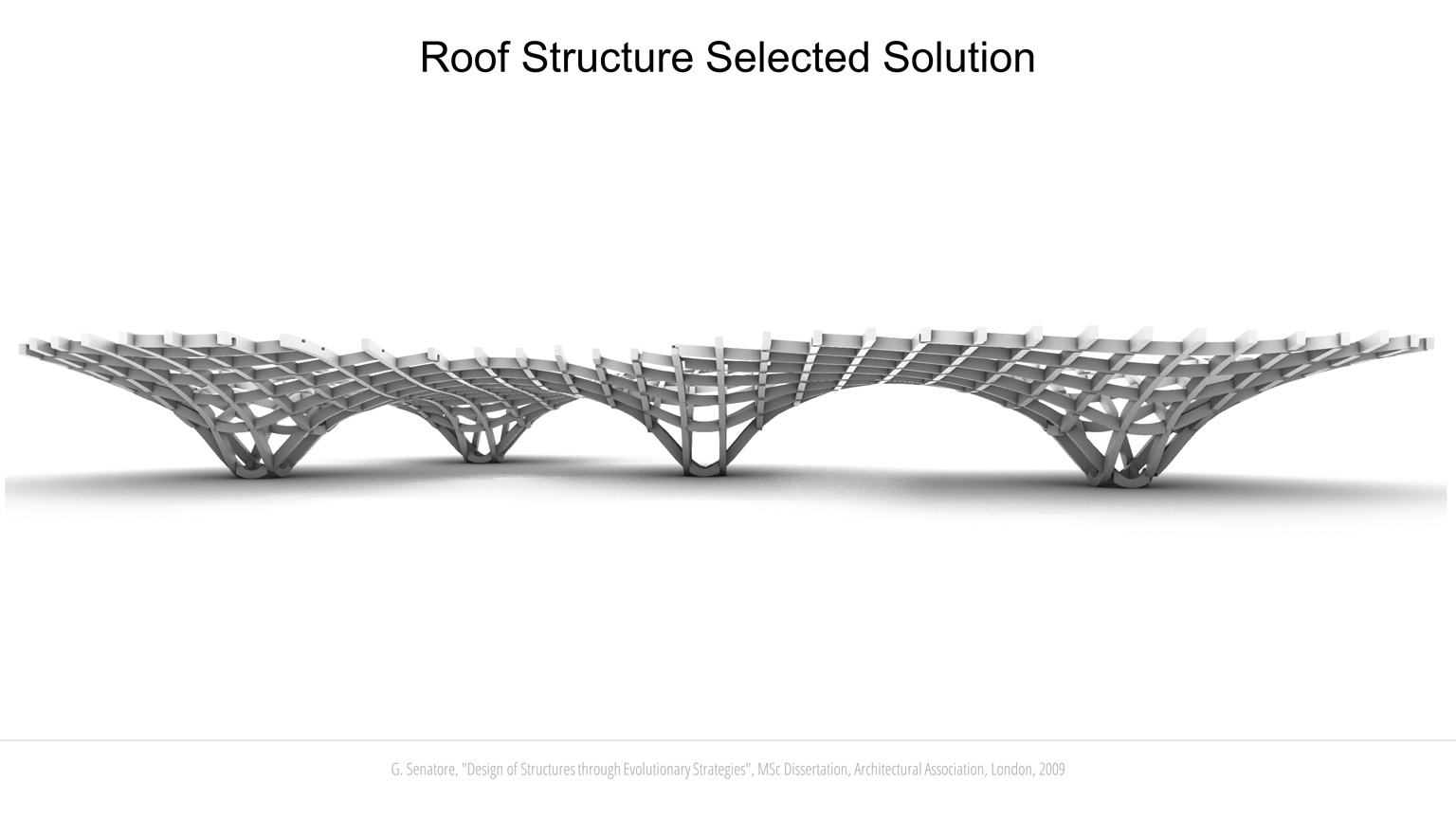 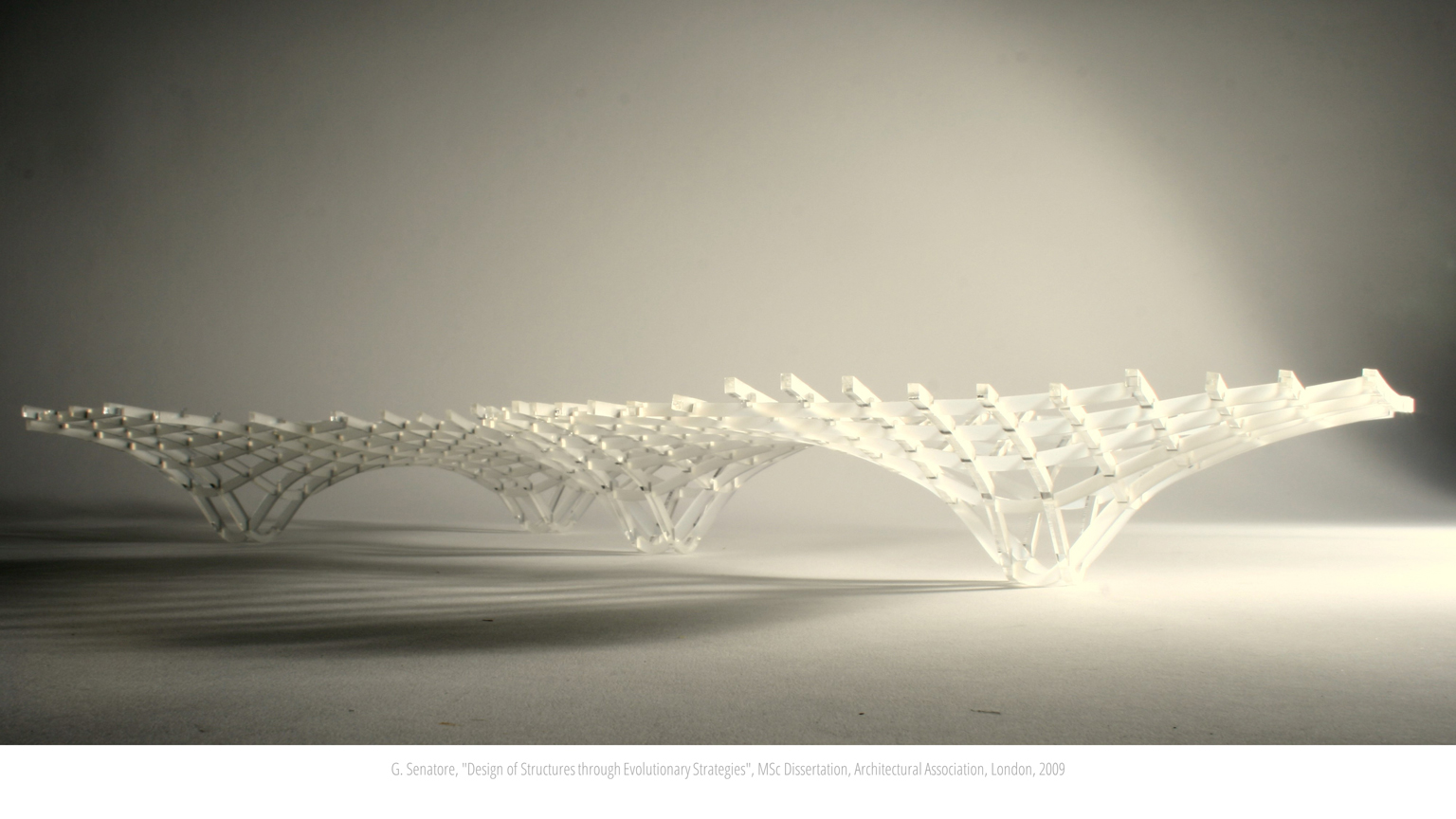 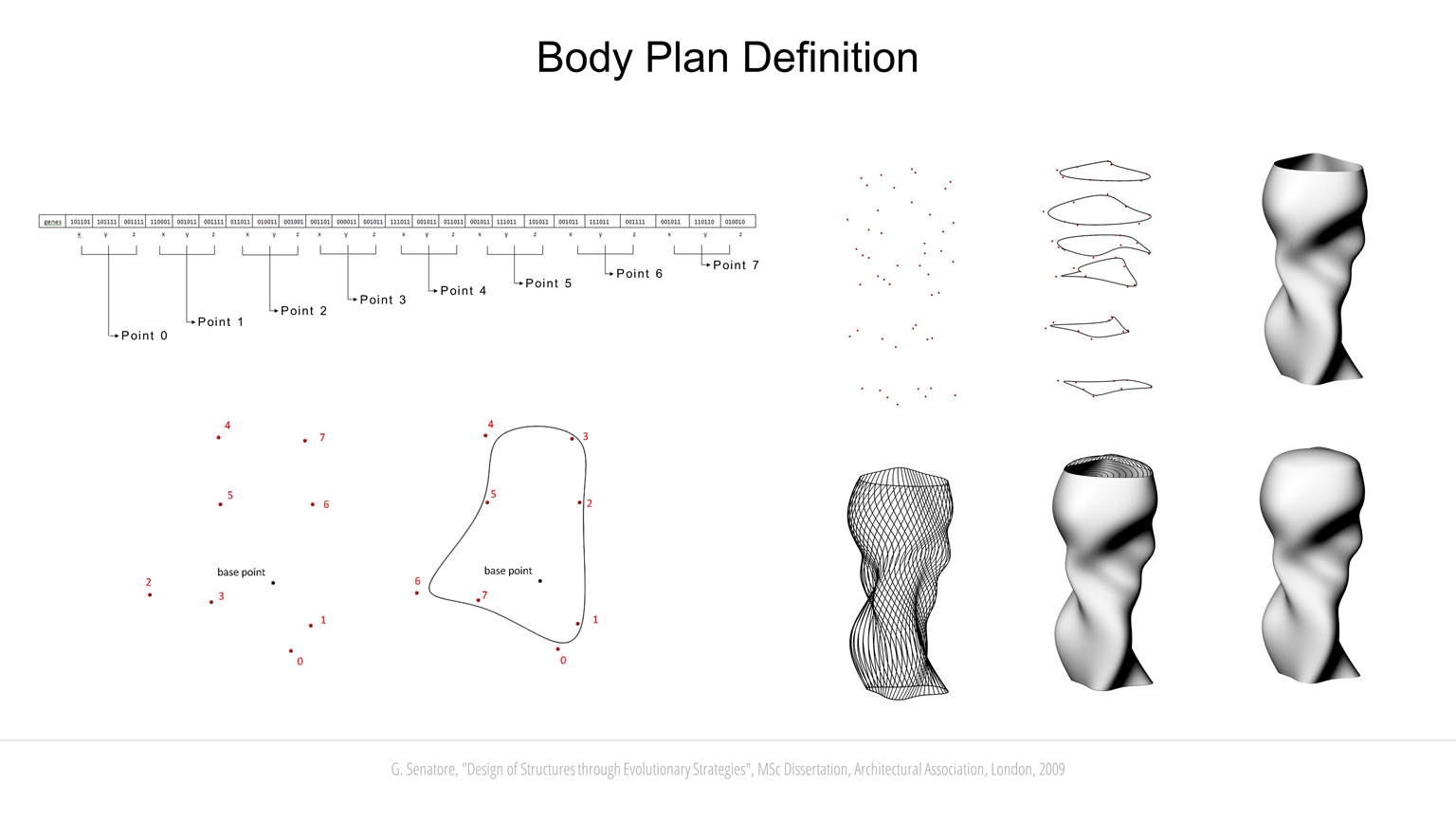 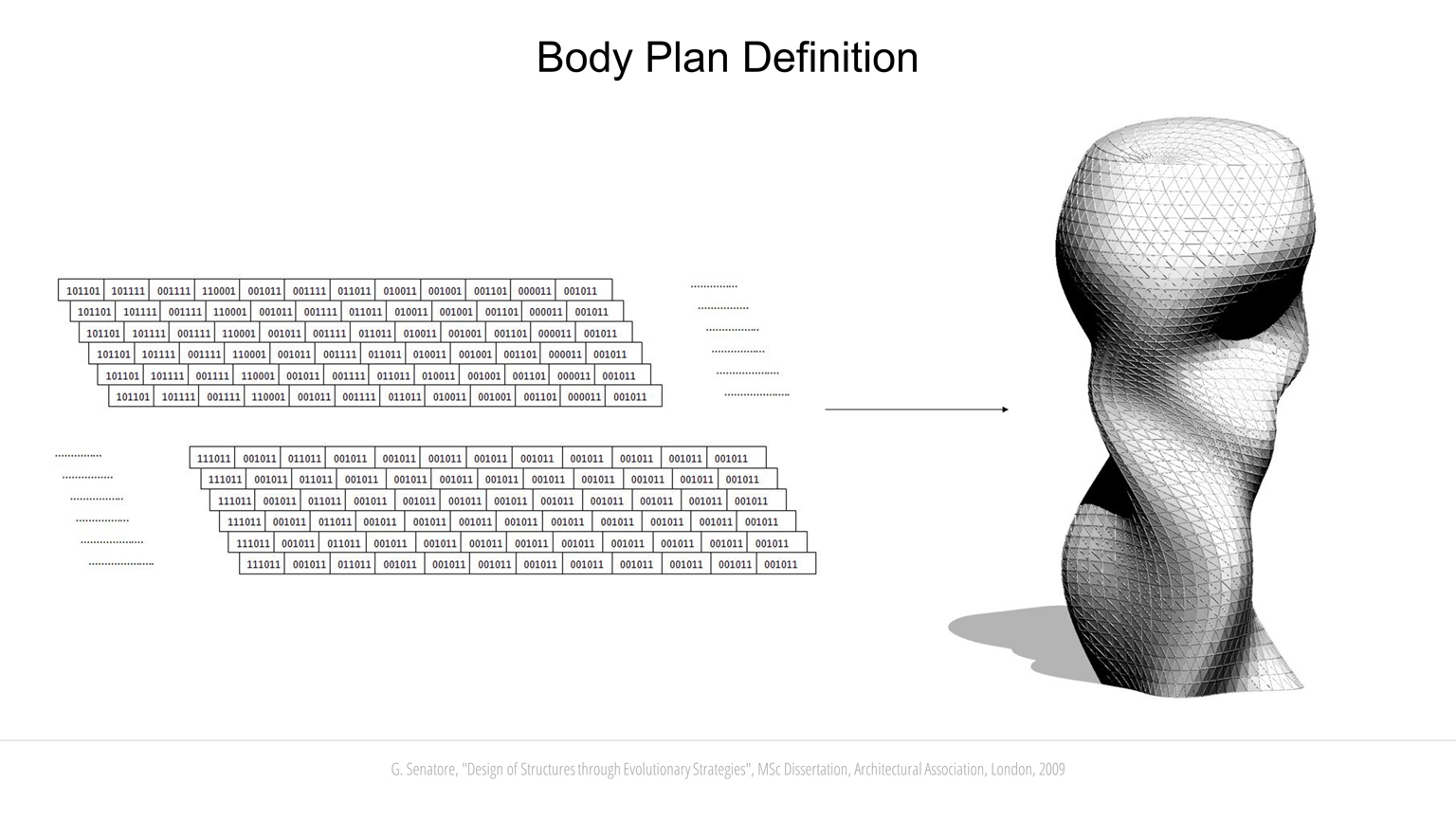 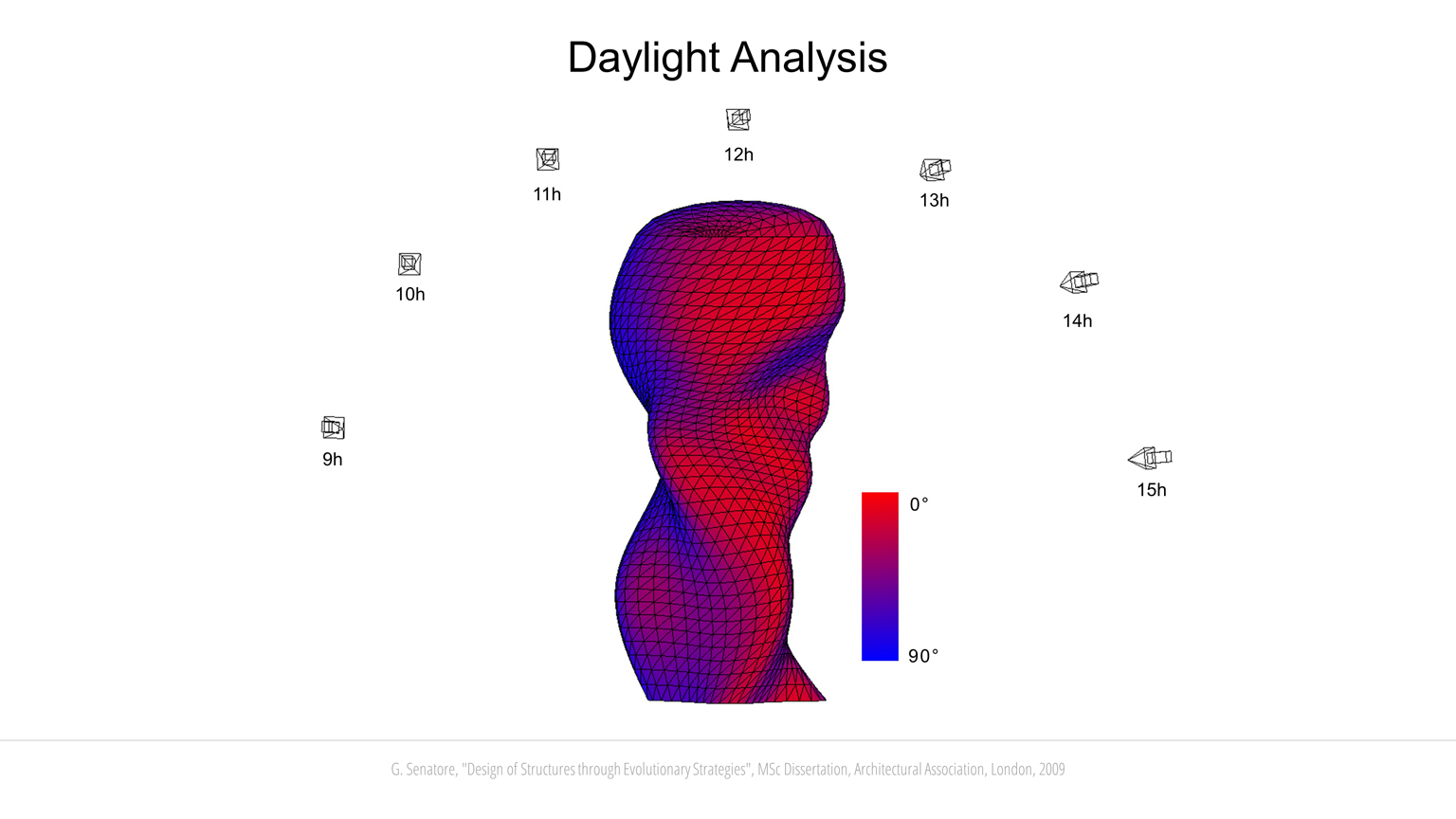 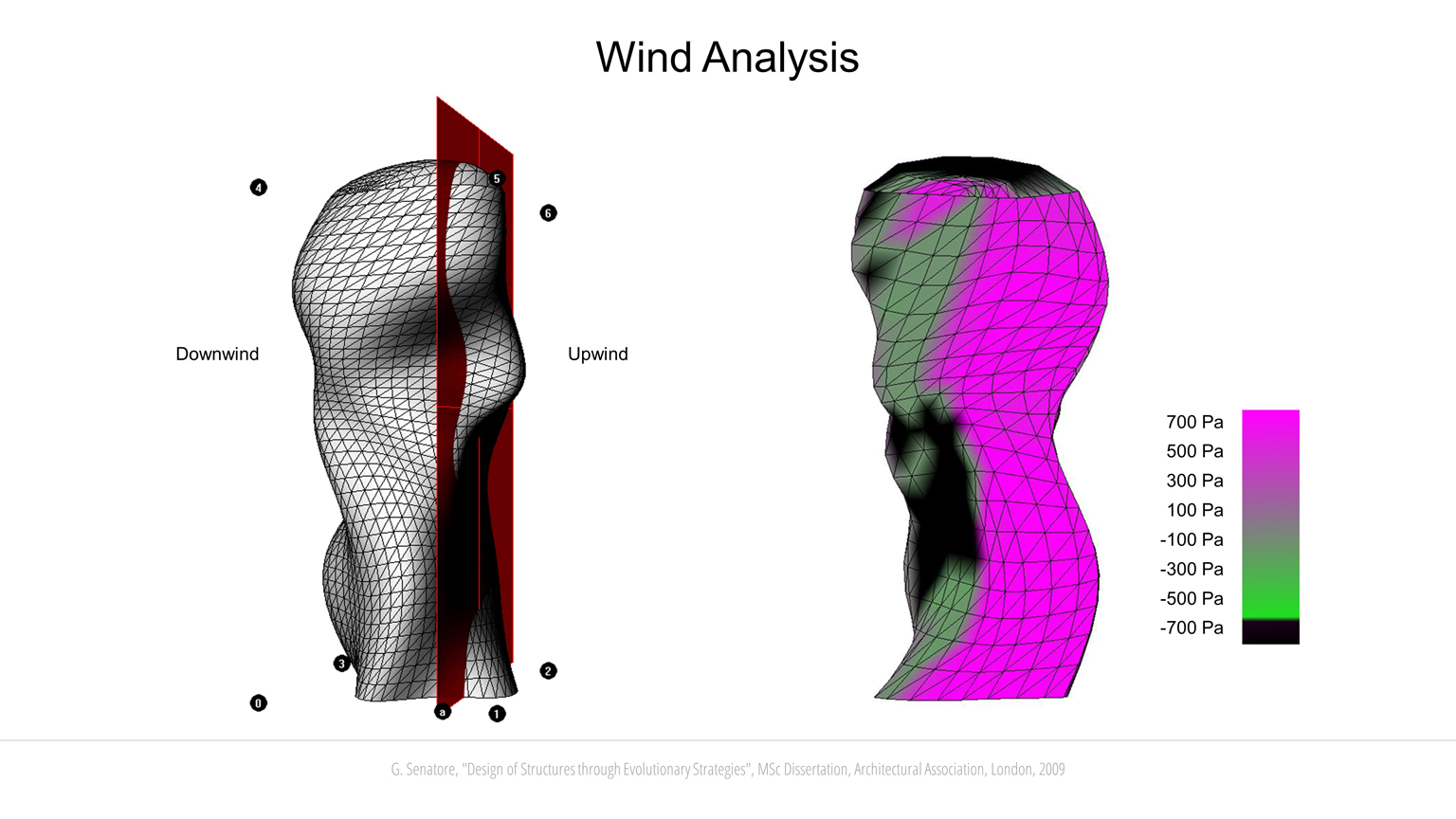 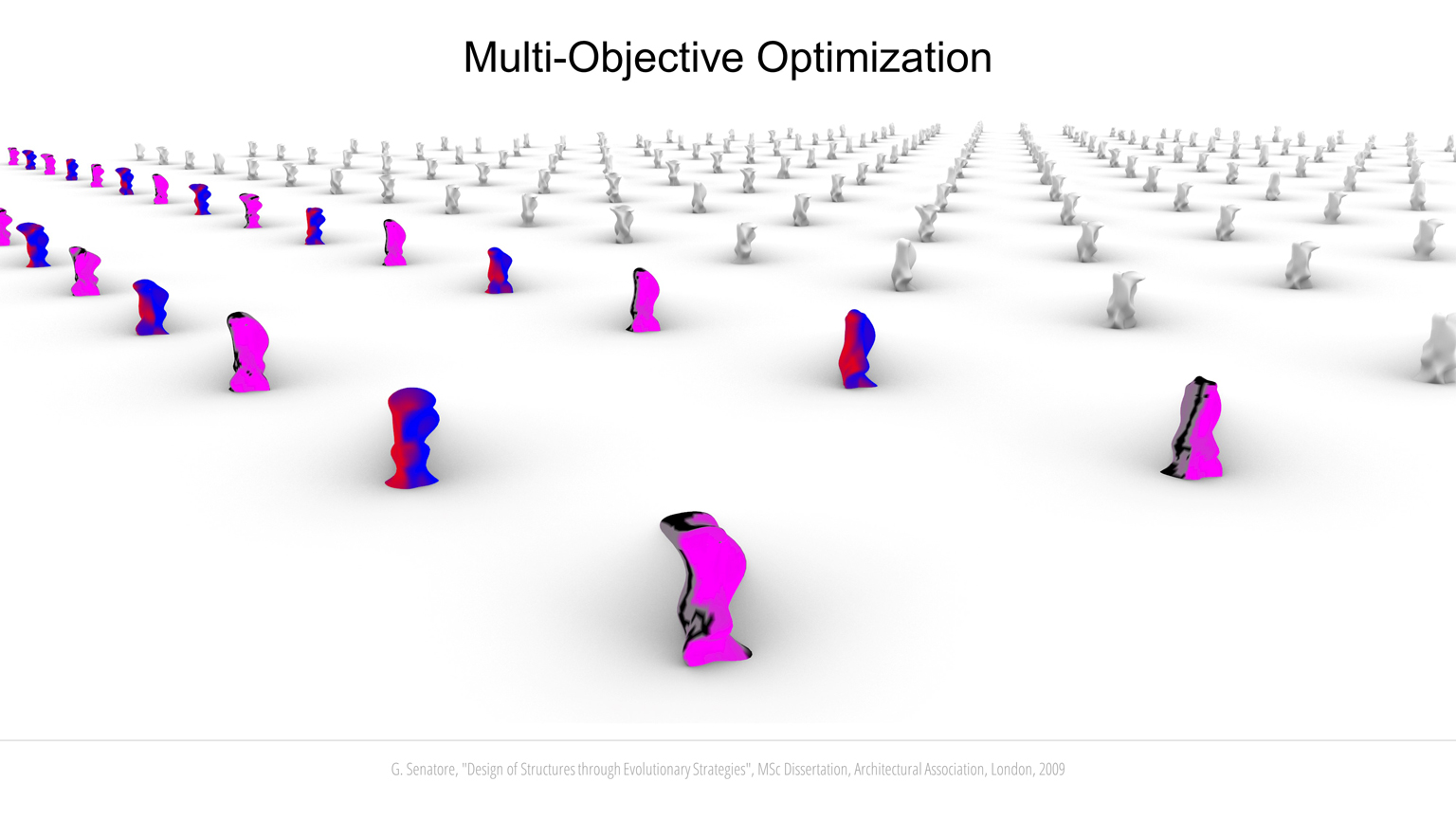 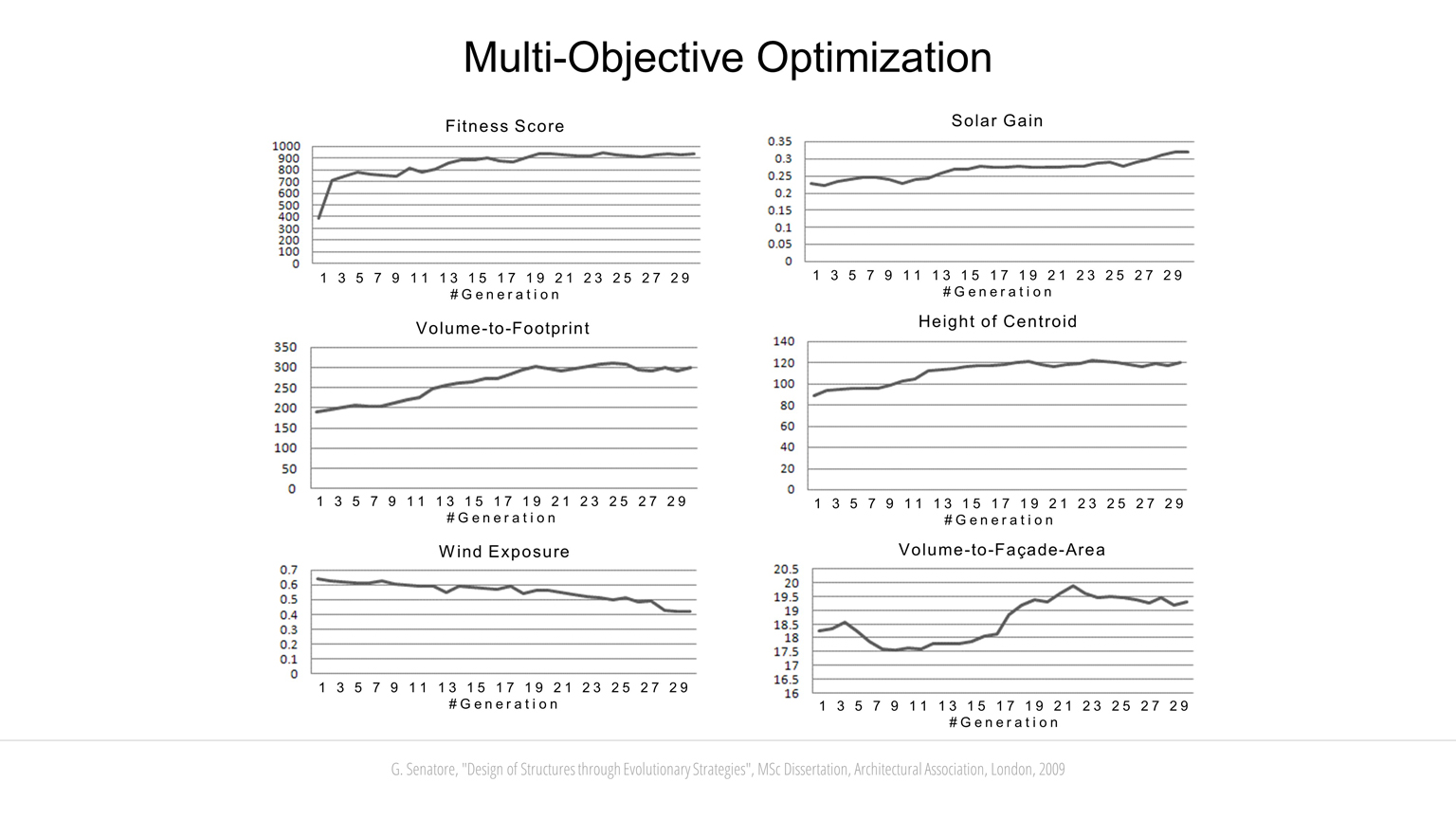 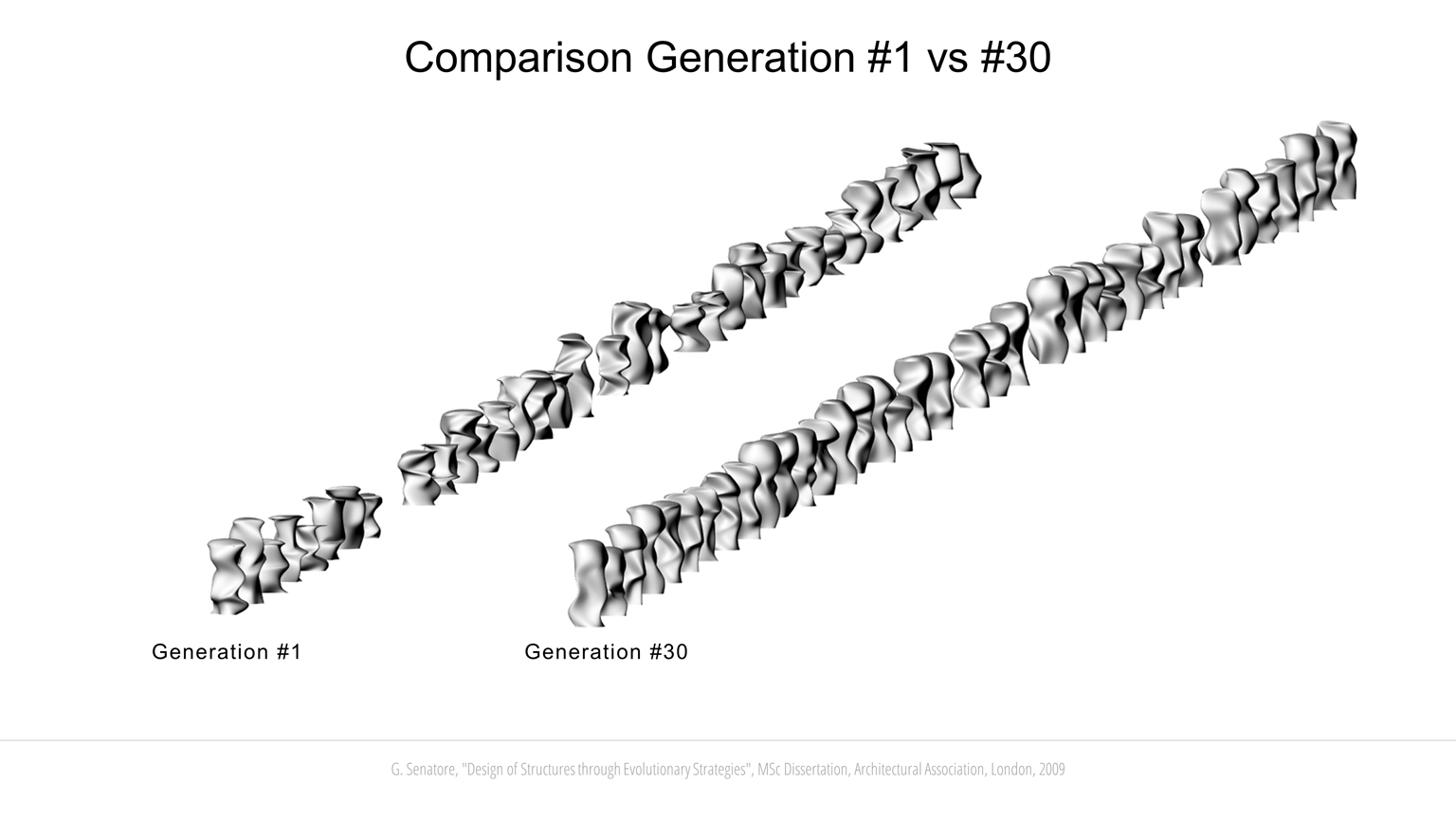 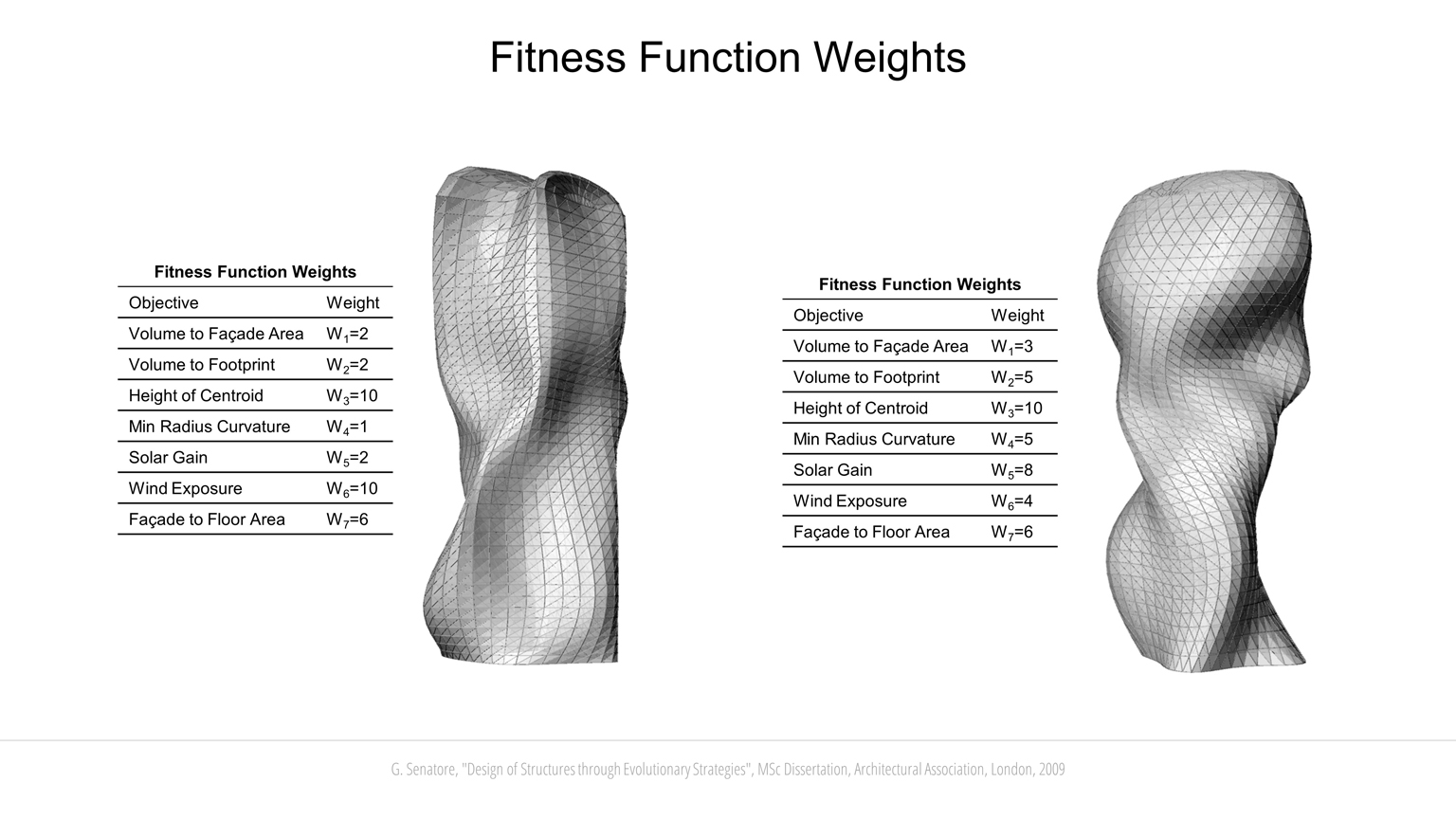 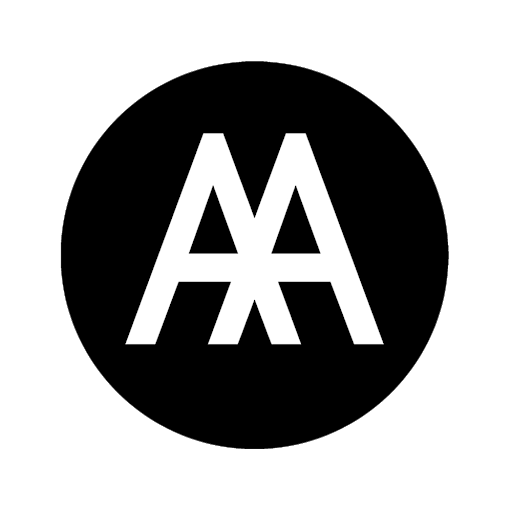